Old churches captivate. The peaceful charm of a simple country church brings back memories of a bygone era. Stately counterparts capture attention with their ornate architectural details. Abandoned structures invoke a sense of awe and mystery. Collectively, historic houses of worship have broad appeal for artists, photographers and history buffs. In Centre County, churches hearken back to the day of the circuit preacher, and have ties to the Underground Railroad. There is plenty of old church inspiration in the communities and along the side roads of Happy Valley. Here are a few worth exploring:

Egg Hill Church is the unique kind of find one hopes to stumble on while out exploring old back roads. Constructed in 1860, the church - one of the first Evangelical churches in Penns Valley - sits off the beaten path on a small wooded lot in Spring Mills, Potter Township. It is an unexpected site as you approach from a winding gravel road. Yet its simple pine and stone construction make it feel perfectly at home in the surrounding stillness. Next to the church is a small cemetery, the final resting spot of Revolutionary War veteran Daniel Waggoner, whose historic homestead is nearby and now a private residence. The last regular service was held in the church in 1927, although a special homecoming service is held each fall. The church was added to the National Register of Historic Places in 1979. With the elements beginning to take their toll, the Egg Hill Conservancy is now seeking to preserve the historic structure. Learn more at www.gofundme.com/save-egg-hill-church.

Nearby things to see and do: Grab a bite to eat at Brother’s Pizza, The Express, or the Earlystown Diner, or head to The Overlook Grill for dinner and an amazing view of Brush Valley and beyond; discover the underground world at Penn’s Cave & Wildlife Park. Plan to stay a while; RV and tent camping is available all summer along at Grange Park. 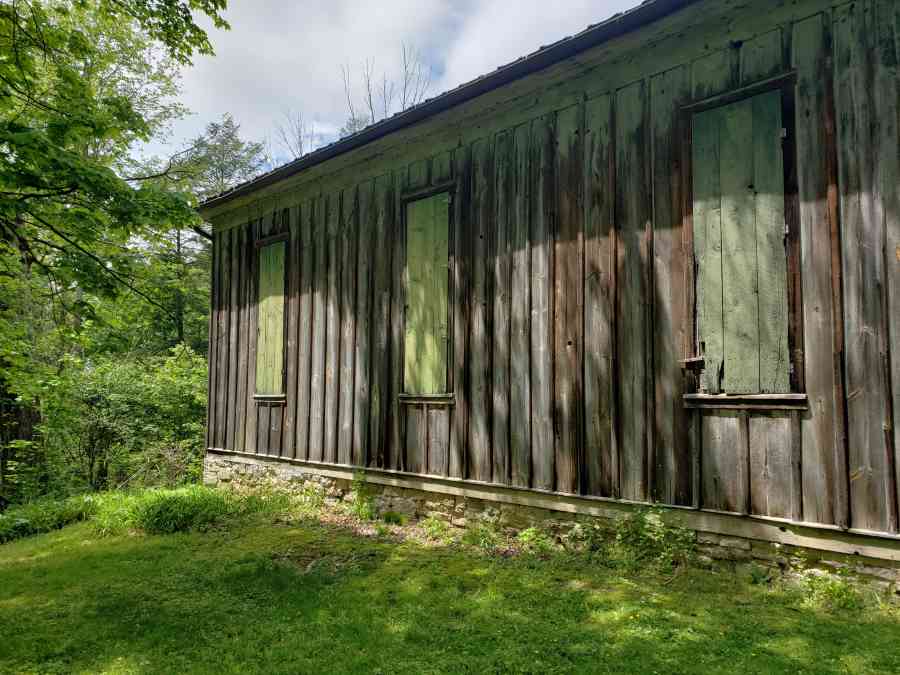 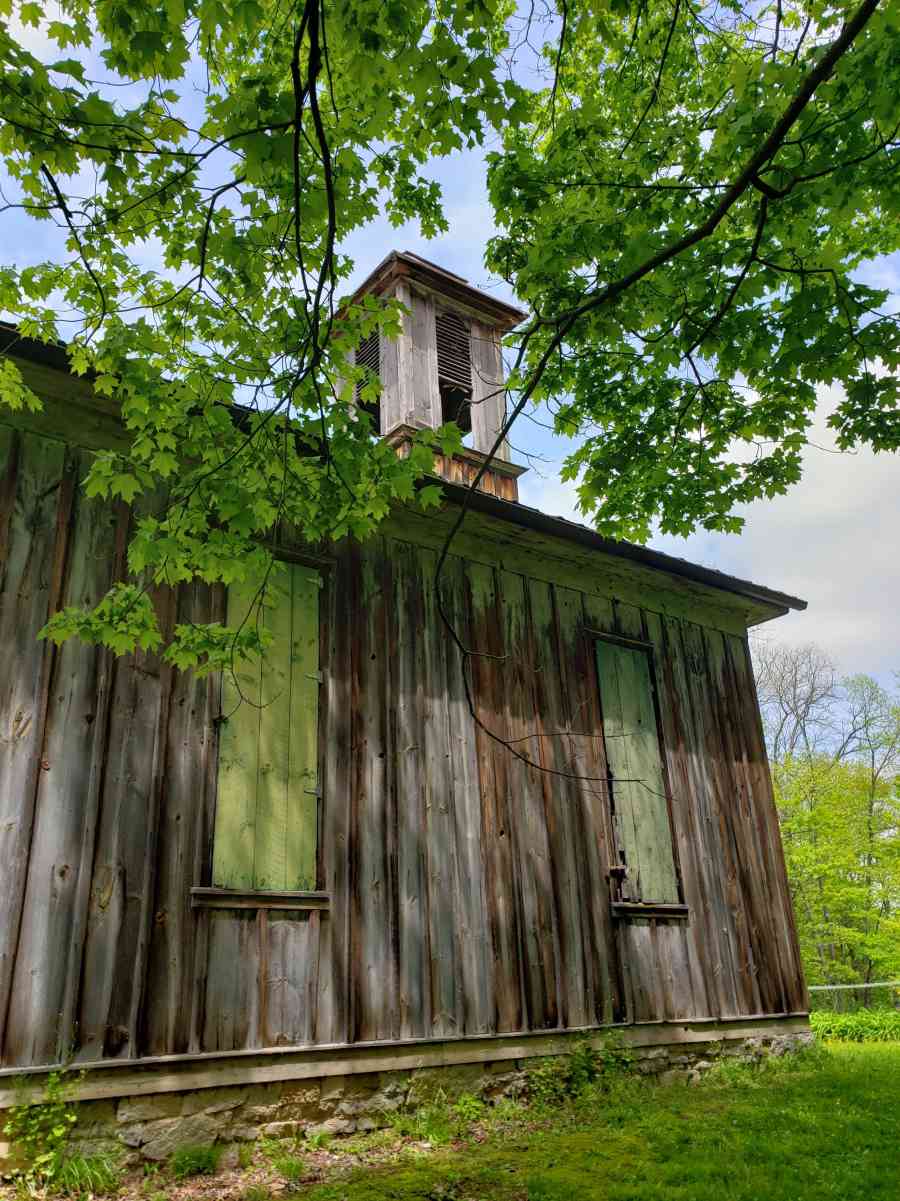 Brush Valley Road is one of many scenic routes in Happy Valley. It's there on the corner of Rock Hill Road where you will find Dubsite Evangelical Church, also known as Rock Hill Church. The church is part of the Linden Hall Historic District, and was constructed in 1897. The weathered church features Gothic Revival influences – peaked colored glass windows and a corner entrance with bell tower. The church stands next to the Rock Hill Cemetery, which was established in 1836. The cemetery grounds are also the site of the original evangelical church built in 1850. A schism in the Evangelical Church Association in 1880 resulted in the emergence of two factions -- the Esherites and the Dubsites -- and the eventual construction of the Dubsite Church across the lane, where it remains today. The grassy area at the entrance of the historic cemetery is where the Esher church once stood. 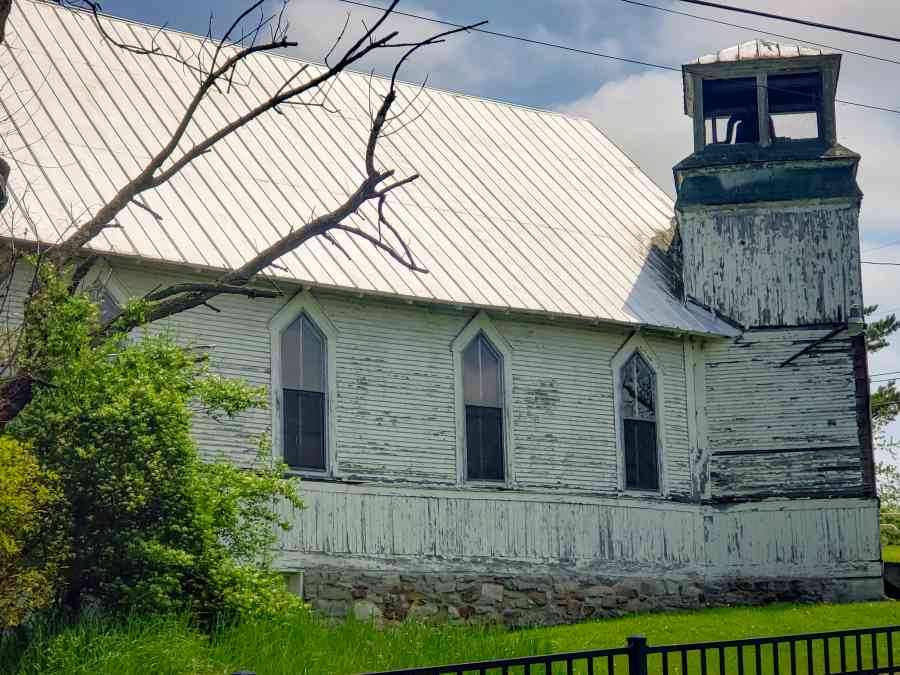 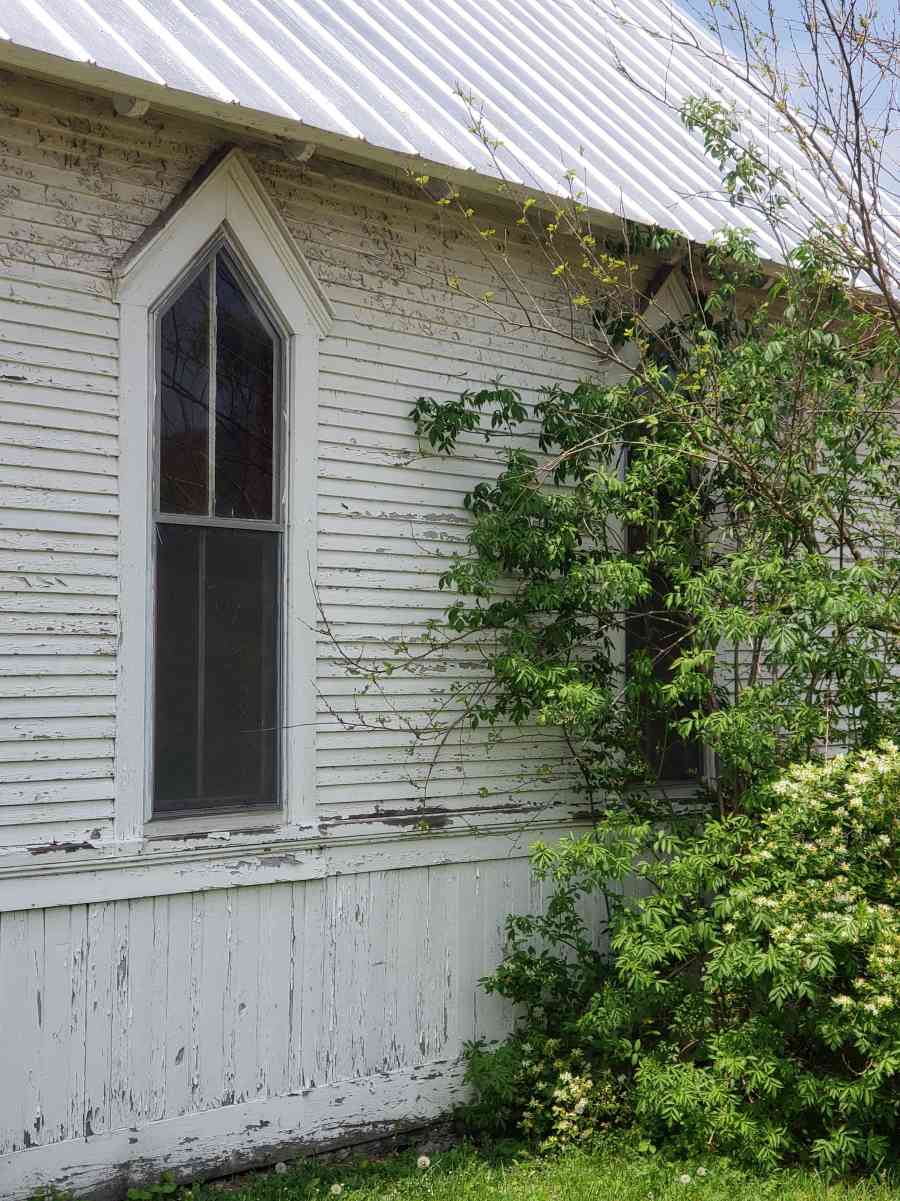 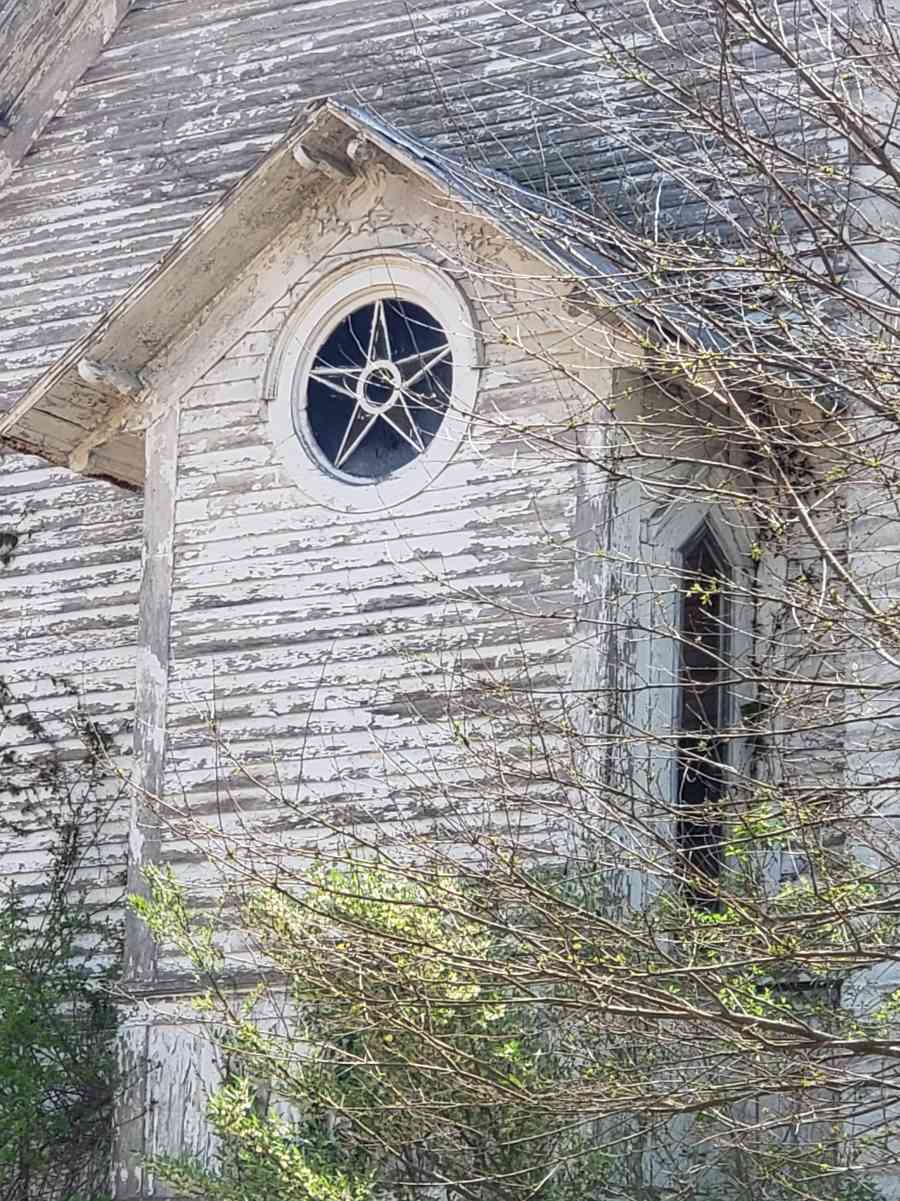 The area in and around Linden Hall -- which was added to the National Register of Historic Places in 1990 -- is dotted with picturesque farmsteads and old homes. Against that backdrop, it's not surprising that the surrounding roadways are popular with joggers and cyclists. In fact, the Rock Hill School serves as a bicycle stop, complete with a bike rack and outdoor comfort facility. It's an ideal spot to rest and take in this bit of Happy Valley history.

Nearby things to see and do: Enjoy a glass of wine at the scenic Mount Nittany Vineyard & Winery, or visit the quaint shops and unique museums in nearby Historic Boalsburg. 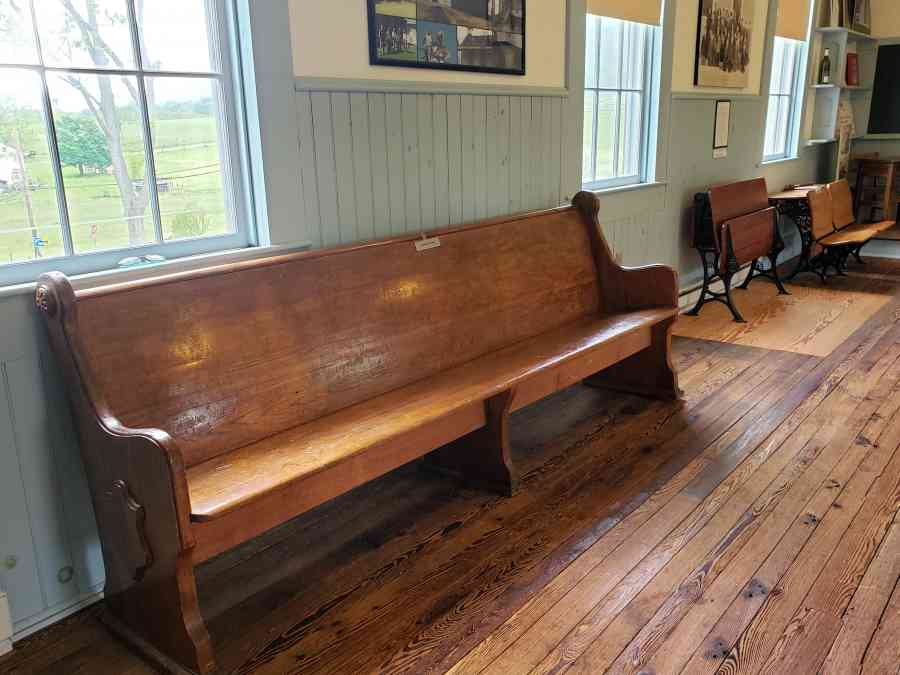 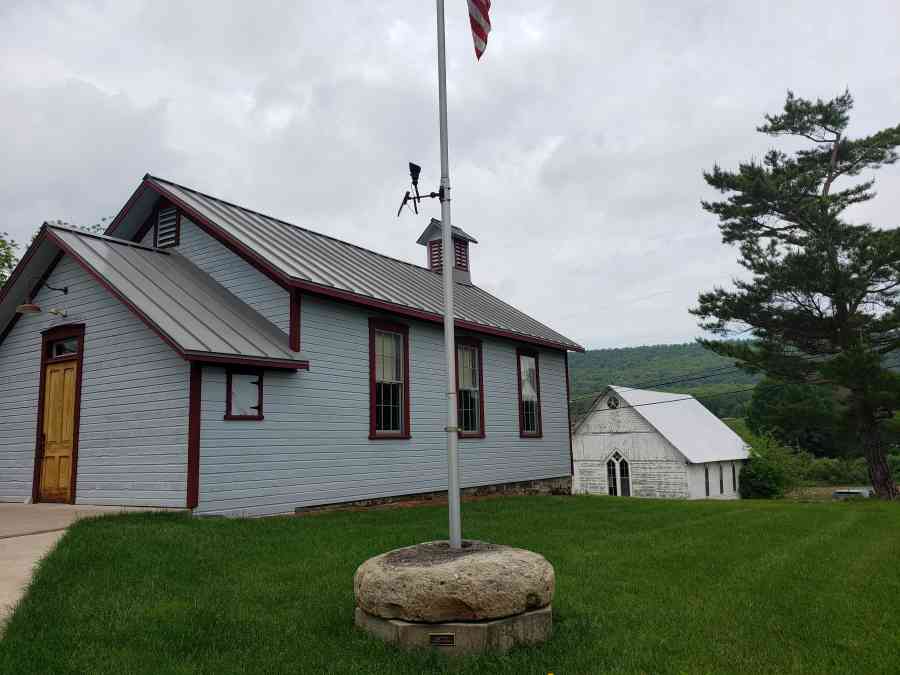 Three miles north of Milesburg and near historic Curtin Village at Eagle Ironworks Historical Site is Curtin United Methodist Church. The charming white country church was founded in 1787 in a log cabin built by Philip and Susanna Antes. Services were held there until construction began on a log cabin in 1804 on the spot where the church stands today. Curtin UMC was the first Methodist Episcopal Society in the Centre County territory. Early services were provided by circuit preachers from the Little York and Juniata Circuit. A Pennsylvania Historical and Museum Commission monument on the peaceful property commemorates the church's founding. A small cemetery rests on the property.

Nearby things to see and do: After exploring the church and nearby Curtin Village, head a bit further north and enjoy abundant outdoor activities at Bald Eagle State Park; consider staying a night (or two) at the tranquil Nature Inn at Bald Eagle.

Nearby Curtin Village at Eagle Ironworks Historical Site features a reconstructed cold blast charcoal furnace that produced pig iron from 1820 until 1921. During that time, it was one of the last in operation in the United States.

Commonly known as the “Old Mud Church” because of its plaster and clay stucco exterior, Union Church stands out from among stately homes when driving in to Philipsburg via historic Presqueisle Street. Constructed as a log meetinghouse in 1820 by the residents of Philipsburg, the building was used both as a school and as the community's first church.

In 1842 the building was extensively rebuilt as the Gothic style Anglican church seen today, complete with a three-story entrance tower at the front. A chancel was added to the rear and the log walls of the meetinghouse incorporated into the main sanctuary. A beautiful stone wall surrounds the church and cemetery – the oldest grave of which dates to 1819. Inside those stone walls is a nearly 400-year-old white oak known as the “Founder’s Oak.”

The last regular religious use was by Free Methodists in the early 1920s. The building was listed on the National Historic Register in 1978. It can be rented for weddings, baptisms and other special events. Tours of the interior and grounds can be arranged by calling Luther Gette at 814 342-4842.

Nearby things to see and do: Front Street in Philipsburg contains a number of quaint shops, including Shindig Alley, a high-end vintage shop with incredible mid-century modern furniture among its collection. Cold Stream Dam provides a picturesque place for a walk or to just relax. 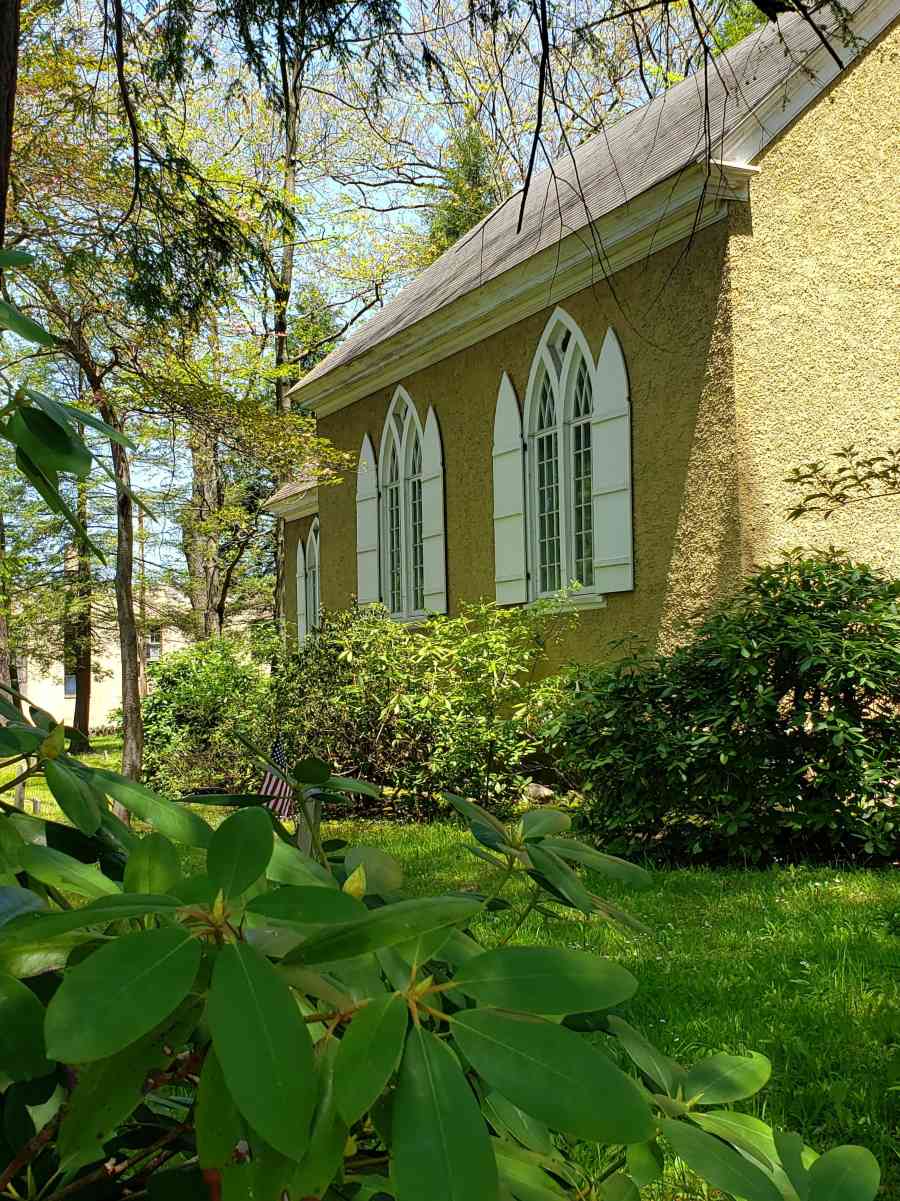 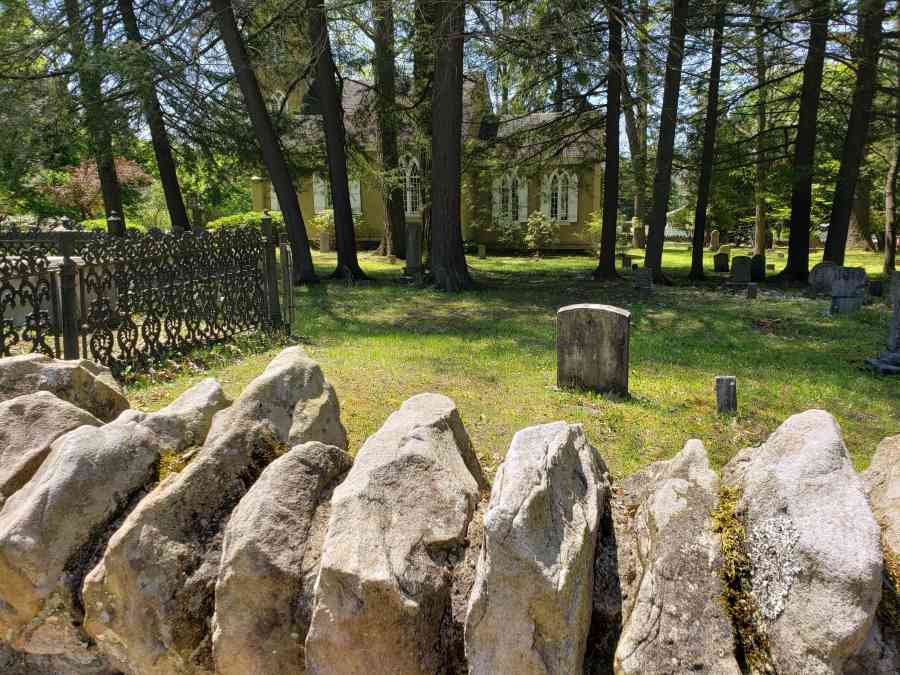 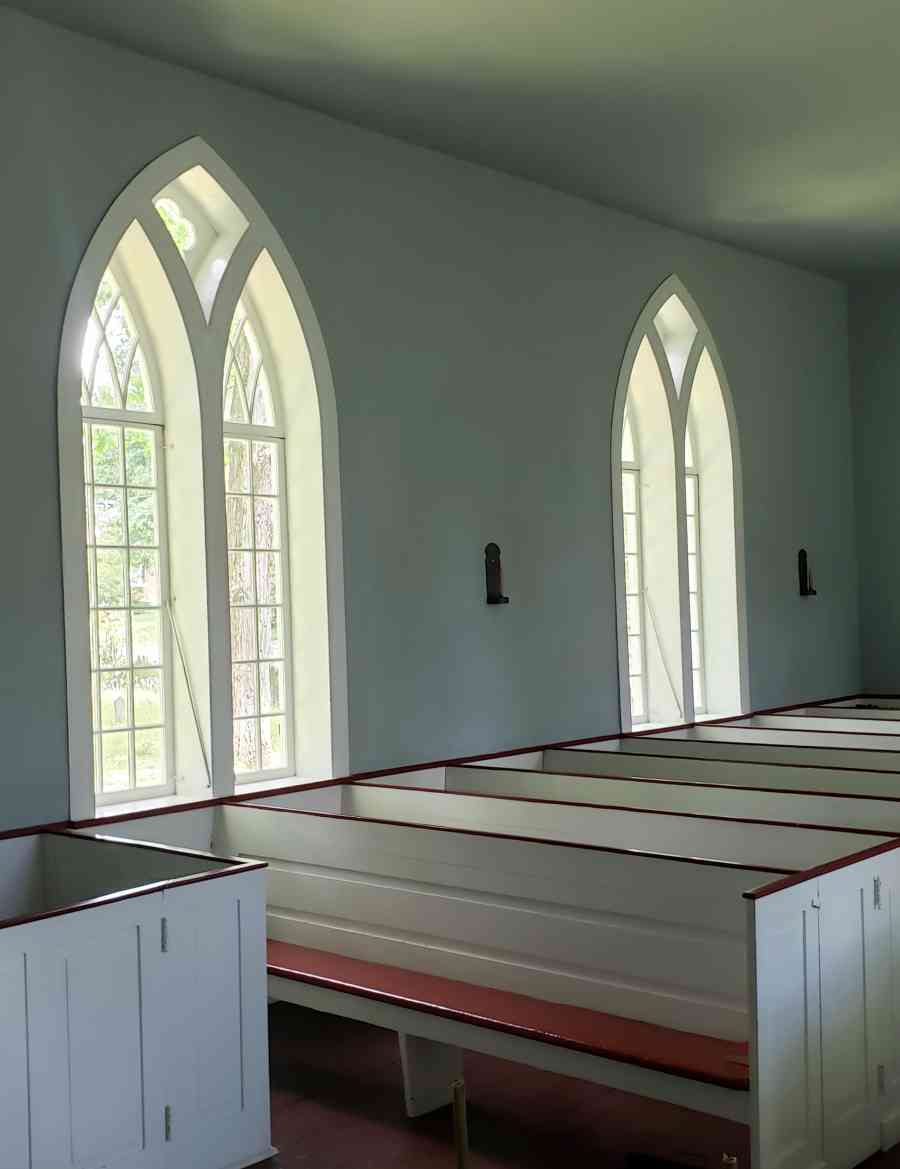 Bellefonte's "Church on the Hill" is an impressive 1859 brick church with an impactful history: Centre County and Bellefonte experienced a significant amount of Underground Railroad activity before the Civil War, but perhaps the most documented connection to the Underground Railroad is the St. Paul A.M.E. Church. In fact, the very lot the church was built upon was donated and deeded to the church by a well-known Underground Railroad supporter, ironmaster and Quaker, William A. Thomas. Thomas even personally purchased the freedom of a former slave family and helped shelter runaway slaves in his pre-1785 property; it is the oldest standing property in Bellefonte still today (on N. Thomas Street). St. Paul served as a spiritual and physical refuge for the enslaved, and we know much of what we do today because of one of its most influential members and leaders, William H. Mills.

*Matt Maris provided the history of the A.M.E. church. Matt has a wealth of knowledge about Centre County's role in the Underground Railroad, and operates Local Historia, which provides historic walking tours of Bellefonte.

Nearby things to see and do: Downtown Bellefonte boasts numerous antique and boutique shops. The Bellefonte Art Museum features an exhibit on the Underground Railroad, which runs through December 2020. Beautiful Talleyrand Park is a great place for a relaxing stroll. Quench your thirst after a day of exploration with a craft cocktail from Big Spring Spirits or local hard cider from Good Intent Cidery. 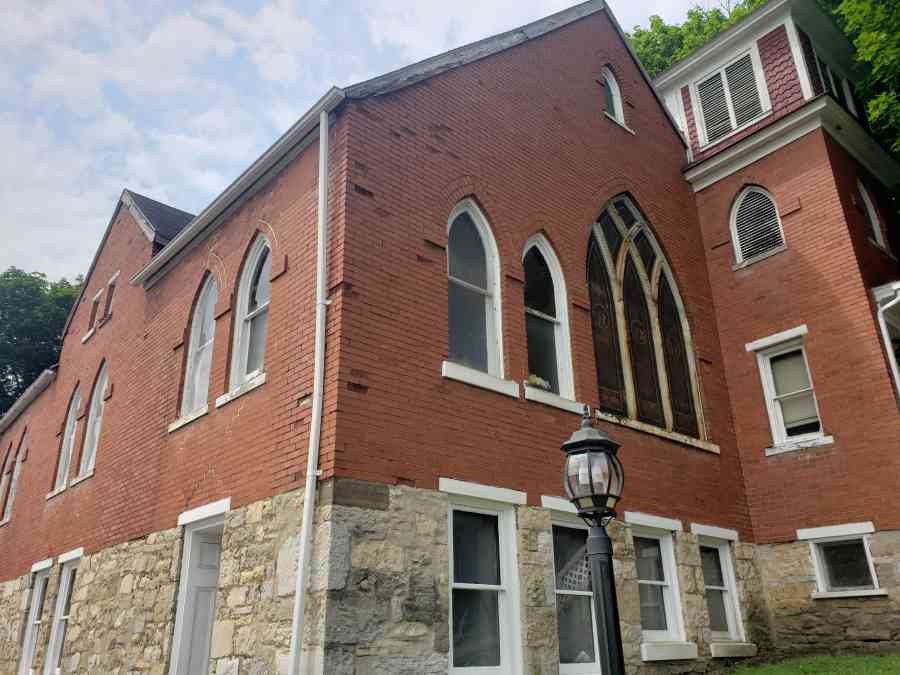 As you drive the backroads of Farmer’s Mills, Gregg Township in the area of Penn’s Cave & Wildlife Park, you may notice a small church standing alone in a field off of Green Grove Road. Established in 1855, Swamp Church, as it is known because of the boggy area in which it is located, is the quintessential white church in the country. The last service was held in 1961, and the church has been privately owned since 1964. As such, it is off limits to visitors, but the scenery, even from a distance, is worth a photograph from afar, and the area itself makes for a picturesque drive. 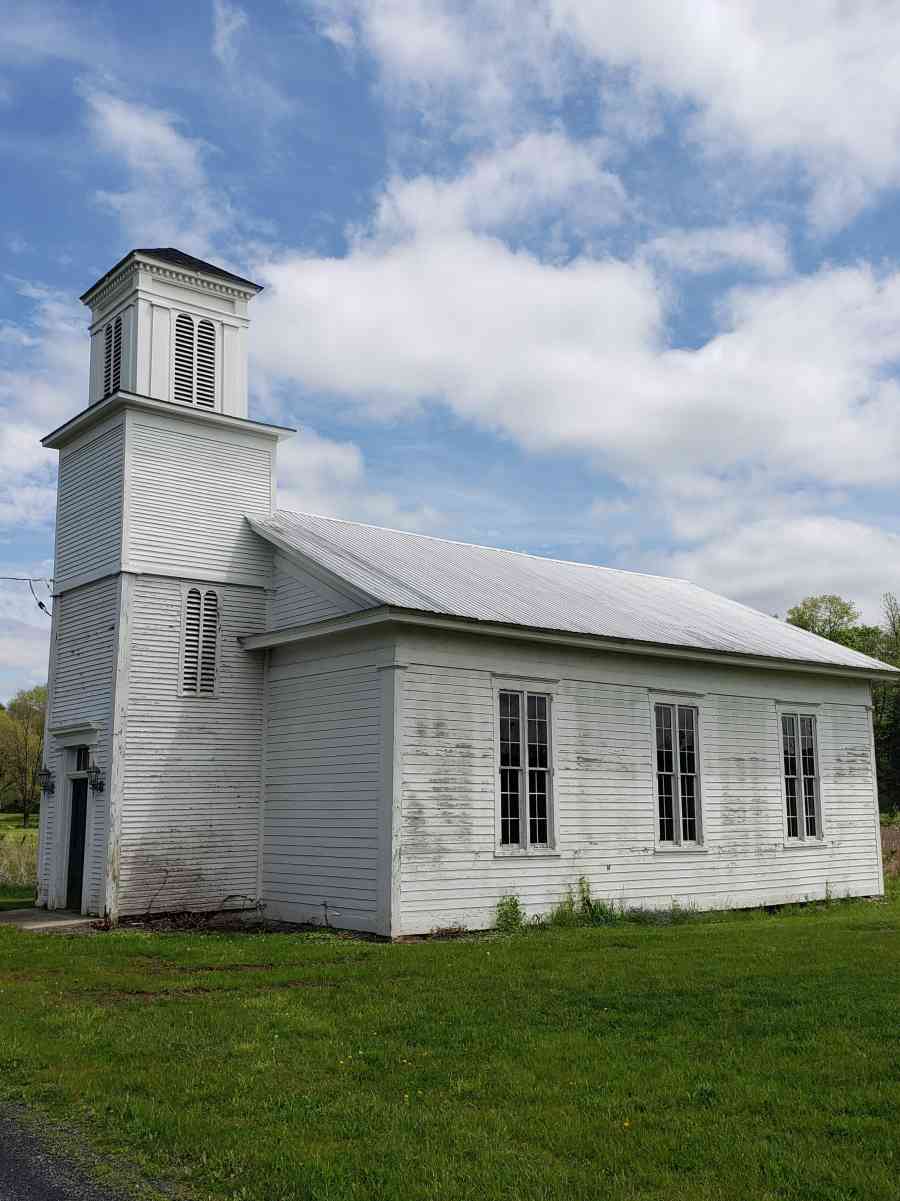 Nearby things to see and do: Penn’s Cave & Wildlife Park is nearby. Or, head down to Millheim and grab a cup of coffee or a bite to eat from a menu of fresh daily breakfast and lunch specials at Inglebean Coffeehouse. You can also enjoy a glass of wine or creative cocktail at Pisano Winery. Looking for more underground adventure? Explore Woodward Cave.

In 1882, the church became the first in the county to be lit by electricity. Accounts say the single arc light was later removed because it was too noisy and churchgoers could not hear the service. The church is not open to the general public for tours, but anyone interested in taking a peek inside is welcome to call the church office to arrange a visit. Or, make plans to attend the annual Philipsburg Heritage Days flower show and quilt display, which is typically held in the church. 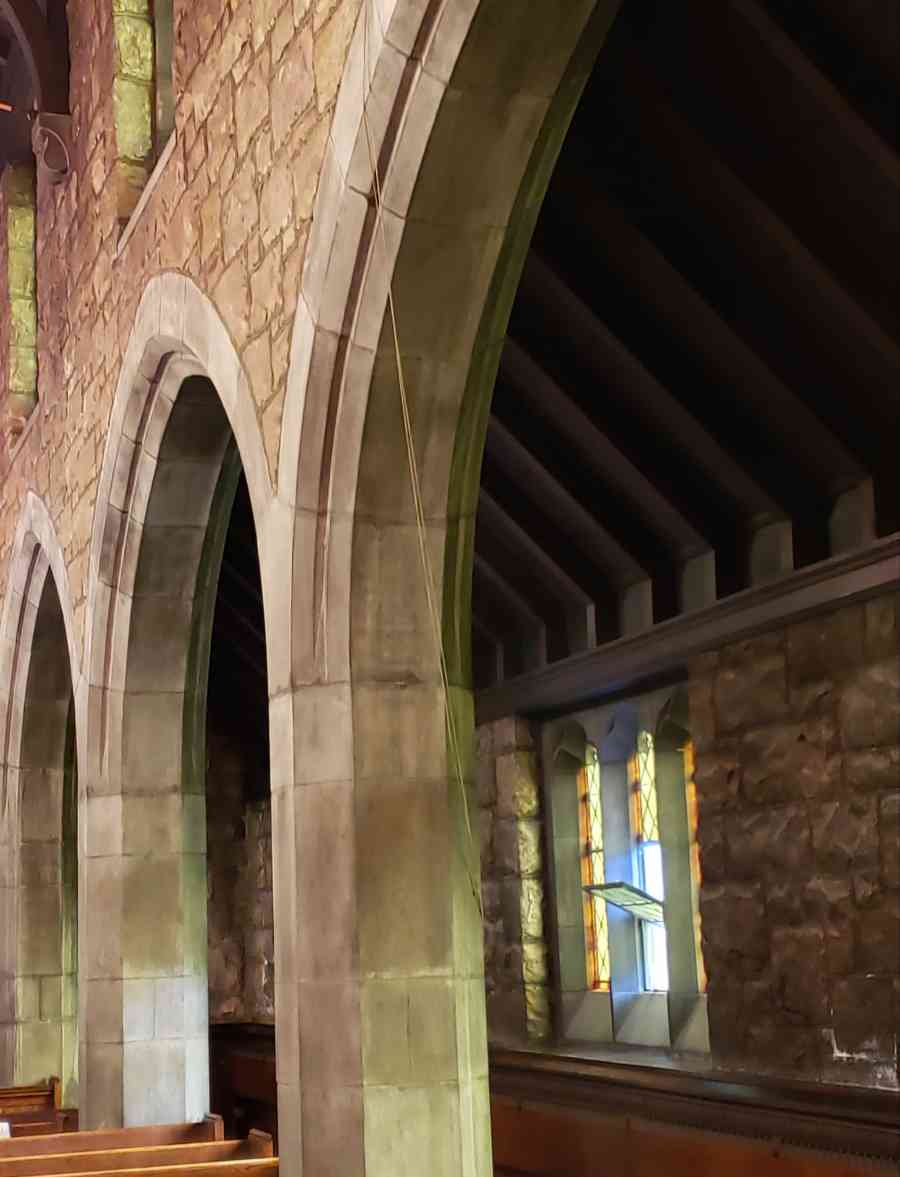 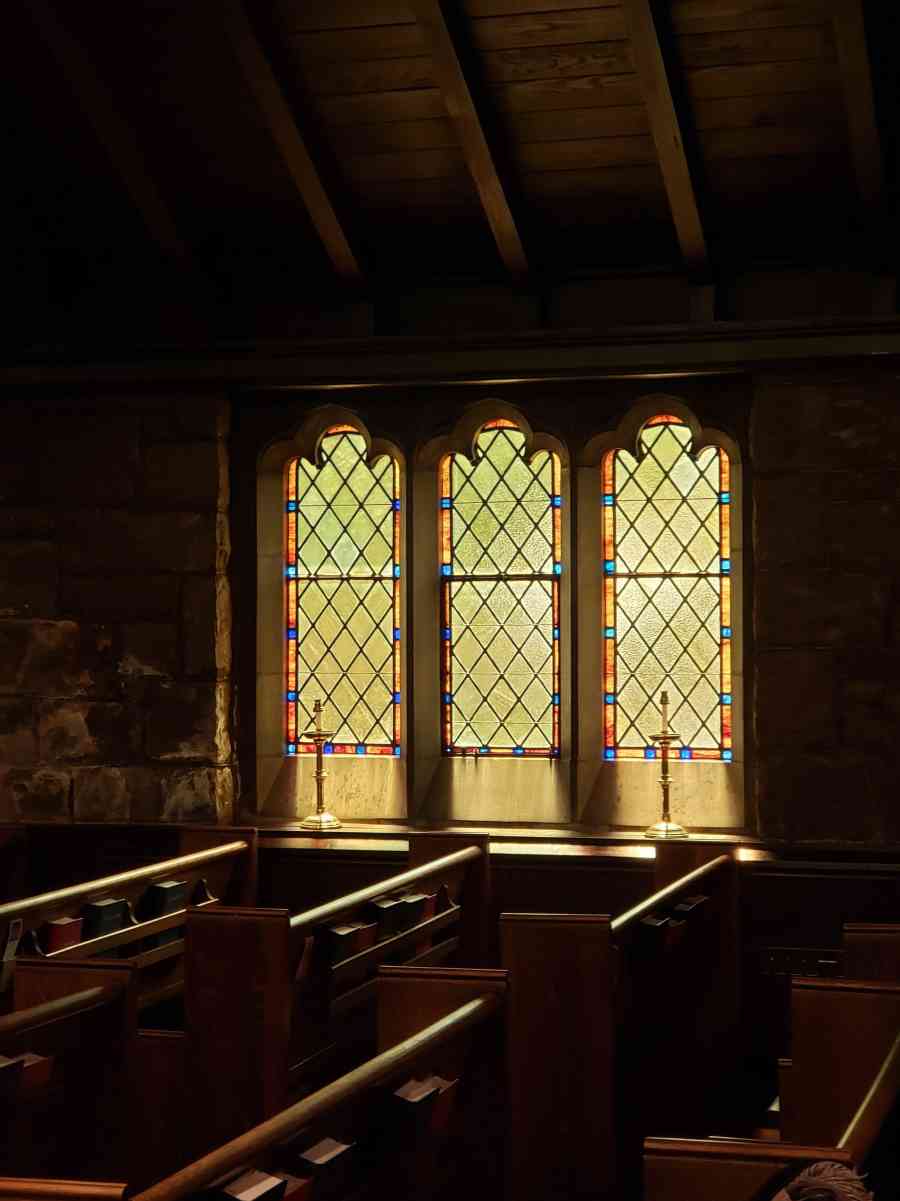 Nearby things to see and do: The Historic Philipsburg Walking Trail is a great opportunity to continue exploring the impressive and diverse architecture of Philipsburg's residential and commercial districts. 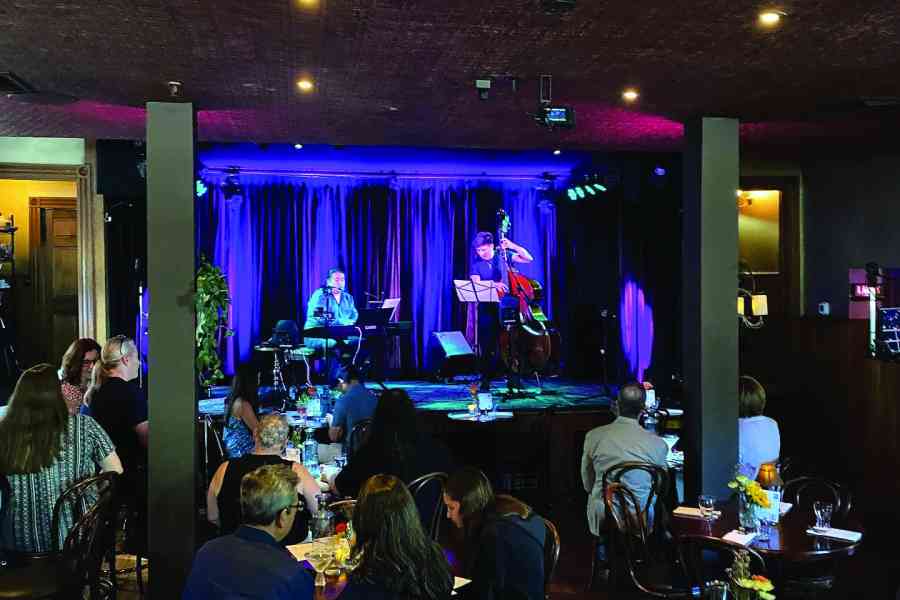 Whether you’re an art aficionado or a newcomer who’s just learning to appreciate the arts, Route 45 Getaways (R45G) is one event for which you’ll want to keep your ears and eyes open. Dates have yet to be set for 2022, but plans are already in the works after the smashing success of the inaugural event held in 2021. 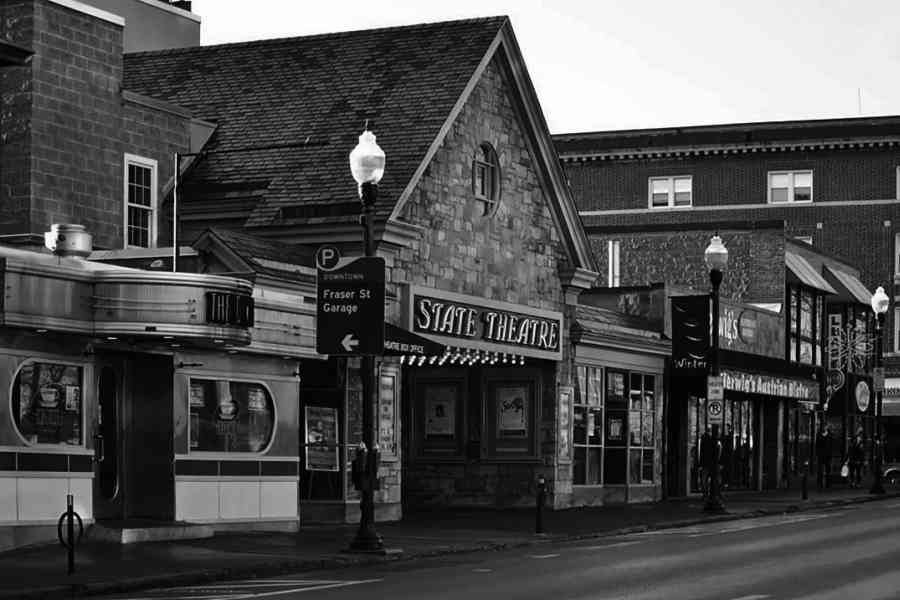 The State Theatre Is Your Theatre

The State Theatre is a non-profit performing arts center dedicated to serving the Centre County region. It’s a mainstay of the State College community and a vibrant hub of local culture, featuring artists both homegrown and nationally renowned. 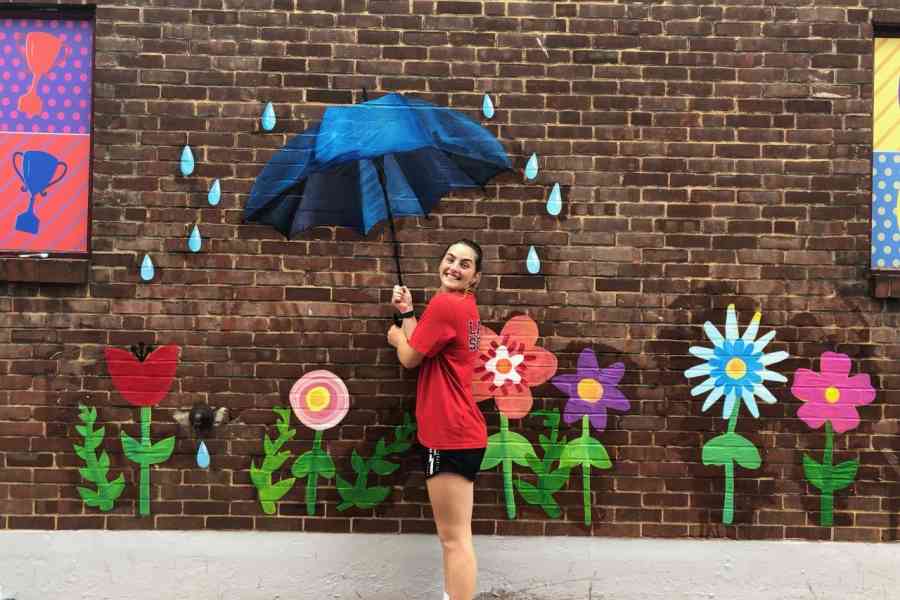 Mention the arts in Happy Valley and most folks will immediately think of Centre County’s most popular arts-focused event, the Central Pennsylvania Festival of the Arts. Over the course of a week, artists and art-lovers from all around the country descend on downtown State College to mix, mingle, shop and celebrate all artistic pursuits.